‘Just perfect!!!! Every time a mix arrives I get that Christmas Day feeling…!’
Sadie Pickering

A great mix can take a good recording and make it sound fantastic!

As well as mixing most of the records he produces, Daniel J. Logan can take a track recorded elsewhere and mix it for you (either at your own location or at Fox Barn Studios). Using a combination of carefully collected analogue equipment and digital plugins, Dan takes a hybrid approach to mixing. Having the flexibility of a digital platform as well as his select vintage analogue gear (from manufactures such as SSL, Neve, Urei, Altec and Ampex as well as some more eccentric pieces such as an old Shure compressor and a hand-built vintage spring reverb unit), allows Dan to be creative in his approach and bring out the very best sound from the recordings.

‘I try to use analogue signal chains as much as possible – partly due to the sound that can be created, but also because there is something quite inspiring about pressing real buttons, turning real dials and knowing that the music is going through a real physical process…’
Daniel J. Logan

Along with receiving tracks from studios, Dan is also often asked to mix songs that have been recorded elsewhere. Be these from bedroom studios or the infamous Narrowboat Sessions (That he does the album mixes for), Dan is experienced in tidying up and then creating great mixes from multitracks and stems that have been recorded in less-than-ideal locations and circumstances.  These projects require a certain skill and meticulous process to pull the best sound from the recordings and many artists have trusted Dan to work for them this way.

Snaps from the Scrapbook 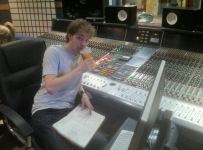 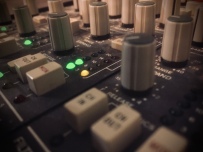 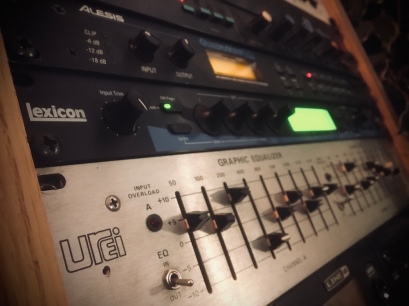 Some of Dan’s outboard collection 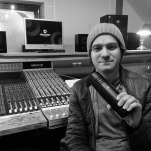 Dan with the Aston Stealth as part of their 33 Panel 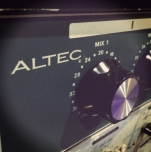